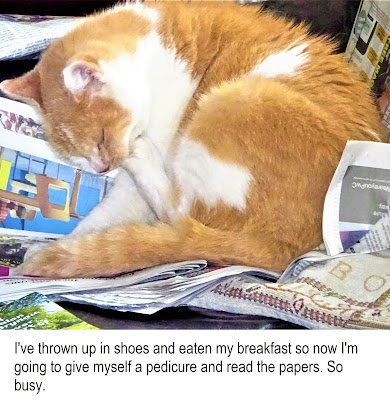 Good morning, one and all, on this particularly fine spring morning.

Yes, I am in an unusually good mood. It's only 7.30am and I have already grossed out the old man and the old woman. Cue evil laugh.

It was their own fault. I was up bright and early and where were they? Under the duvet, snoring, the pair of them. I tried everything short of putting a bomb under the bed. They are a peaceable pair and no bombs were forthcoming.
Not even my cold wet nose pressed against their faces or sitting on their heads managed to wake them. Even singing the song of my people had no effect.  Then when I found my food bowl was empty I had no choice but to put Plan B into action.

I went into the sitting-room and found three spiders - not hard to find spiders in this house, what with the abysmal level of housework. They're ex-spiders now. In fact, so ex are they that they ended up in my stomach. I found some fluff and swallowed that as well. Then - result - under the sofa was that dried up bit of pork I had been saving for a rainy day and forgotten about. That rainy day had arrived - it went down a treat.

I had a couple of gulps of water to make sure all the ingredients were nicely marinated, waited a few minutes, and puked half of it up in the old man's shoe and half in old woman's.

They overslept and were later running about like blue-arsed flies trying to get to work on time.

To say they weren't best pleased when they thrust their feet into their shoes was an under-statement. I didn't know they knew such language. The air turned blue and my ears turned red.

At least they weren't too rushed to forget to feed me. I'm now curled up on the settee, purring away, after I finally got my breakfast. Have a good day, Peeps.