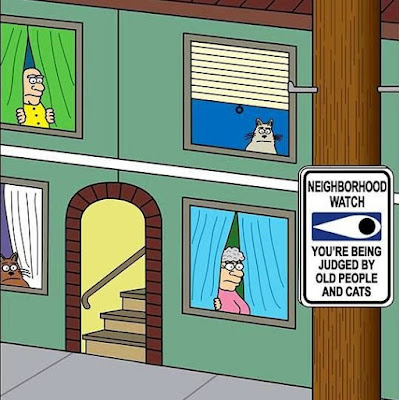 A few years ago I adopted two pets. I am sad to report that it is getting more obvious every day that they are both are getting past it. They are galloping full pelt towards senility, which is worrying. For me.

Now the eyesight is becoming a problem. Yesterday the old man picked me up - as I allow him to from time to time - UPSIDE DOWN. The indignity. My ass was in his face and my head was on that huge round thing he calls a stomach. Then he dropped me. Good job I have the reflexes of a well-honed athlete or there could have been a nasty accident.

I am now afraid to sleep on their faces when they are in bed as they might stop breathing altogether. It's a worry.

Even so, older pets have their advantages. For those of you who are unsure about adopting an older person, here is some information from Cats Protection. They seem to have mistakenly used the word "cat" instead of "person" and included other little typos like saying "litter box" instead of toilet so I have corrected these for you too. You're welcome.