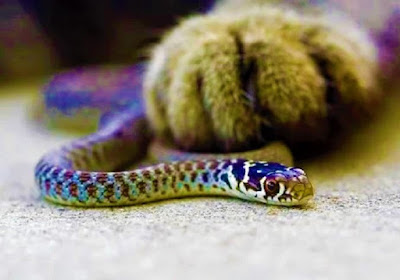 By the way, picture is not my paw and not my grass snake.
My snake was deader than a dodo. [Picture posed by model]


I was out and about in the early hours of the morning, roaming around my territory, making sure no interloper was hiding (you know who you are, stupid neighbour cat Rajah) when I spotted a snake in the grass.

This snake though, was going nowhere and hurting no one. It was a dead as a door nail, as dead as a dodo, it was deceased, it was an ex-snake.

I am such a kind and generous cat that I decided to share this grass snake with my old man and old woman. It may have been dead but it wasn't easy wrestling that snake through the cat flap, into the house and up the stairs.

I didn't have time to gift wrap it but I laid it gently on the pillow between the old man and the old woman and prodded them both with my paw to wake them up.

What a kerfuffle! The old woman screamed loud enough to wake the dead (although not quite loud enough to wake a dead grass snake - she should have upped it a few decibels). And the old man started swearing - words I cannot repeat in a family blog. The next thing I knew the snake was flying through the window and landed on the grass near enough where I had picked it up in the first place.

So that was my morning. A load of effort for no return; a gift rejected; and a snake lying dead in the grass.
I'm a funny cat!