L is for Lullaby 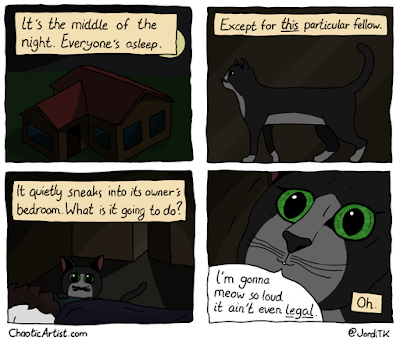 After a busy day the old man and the old woman opted for an early night. I crept in about half an hour later and they were both fast asleep. I thought I’d give them sweet dreams so I settled down between them and started to sing a lullaby. Were they grateful? No, they were not.

They awoke. ‘For goodness sake, Toffee,’ the old man said sleepily. ‘Why all the racket?’
The old woman sat bolt upright and switched on the light. ‘Whassup?’ she shouted, like some bad-tempered teenager teleported from the 1980s.

‘It’s only Toffee,’ said the old man. ‘She’s having a funny five minutes.’ He began to stroke me and said, ‘Settle down, girl. Time to sleep.’

The old woman switched out the light and sighed deeply.

‘That cat is absolutely nuts,’ she said.