J is for Jail 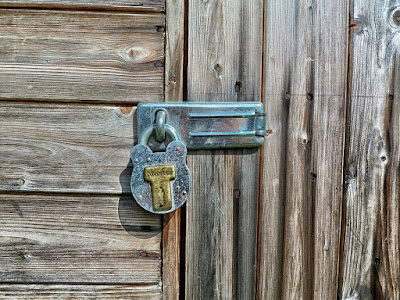 I may occasionally sound slightly grumpy but I do appreciate my staff.

The Help (a.k.a. the old man and the old woman) do their very best for me despite their limitations. I expect good service and on the whole I get it. In return, they are well paid with guard duties (I always let them know vociferously when there is an interloper in the garden) and entertainment. They are always laughing at me and will often say: "Here comes Toffee's funny five minutes," demonstrating how much they appreciate my comedy routine.

However, yesterday they let me down but, even worse, they let themselves down.

As you may have noticed, Spring is springing so the old man and the old woman have been out in the garden. They have started tilling so many vegetable seeds that you might suspect there is a famine just around the corner and they want to be prepared. I haven't seen the catnip going in yet but no doubt it's just an oversight which will be remedied shortly.

I curled up on a bag of compost, peering out of the shed door to keep an eye on them. They always need me to supervise. It was a sunny day and as I was catching a few rays I thought I would "rest my eyes" for a while. The next thing I knew, that shed door was banged shut and I was TRAPPED.

I must have been there for HOURS AND HOURS, although I later heard the old woman say: "I don't know why she's making so much fuss, she was only in there  20 minutes." I think it was a slip of the tongue and she meant "hours", or possibly days.

Anyway, I yowled and scratched and then jumped up on the bench and pressed my face to the window to see if I could attract anyone's attention.

When they FINALLY let me out, I stalked off in a right old strop. This made them laugh. They're so stupid they can't even tell the difference between a justifiable sulk and one of my comedy routines.

I took myself off to the guest bedroom where I stayed for the rest of the day, punishing them by not allowing them my company. I saw later that they had tried to drown their sorrows by drinking lots of red wine and beer.

They are obviously contrite so I have forgiven them but they should know they are ON A WARNING and should anything similar happen again I might not be so forgiving.