F is for Favourite Food 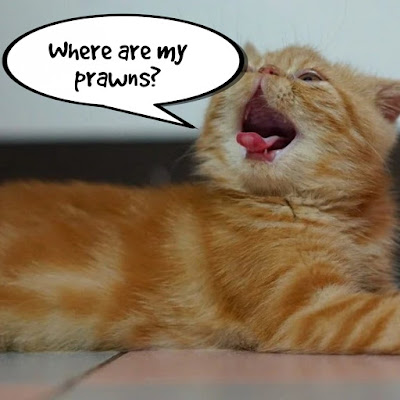 I expect my high standards from my hoomans especially when it comes to food. They provide me with a decent enough diet - there's no supermarket own brand gloop, they share morsels from their own plates and I get the occasional treat.

It's true I aspire to those little tin foil trays that you see the posh boy cats eating from on the tellybox - I mean, the other day I saw an advert for cat food terrine. Terrine! I'm not sure what terrine is but even so TERRINE! I get tin foil trays occasionally as a special treat or on my birthday. But my favourite food is prawns, although I only get a few at a time.

Here follows a prawn lesson. Pay attention, I will be asking questions later.

My American friends call prawns shrimp, unless they're very big and then they're called prawns. We British call shrimp prawns and prawns prawns although we do sometimes call those small brownish prawns (that's the American shrimp) shrimps and the big prawns (prawns in USA) king prawns or jumbo prawns. Sooo, prawns can be shrimps and shrimps can be prawns or they could be both at the same time.

Australia, New Zealand and some Commonwealth countries tend to use the British definition. When Australian comedian Paul Hogan used the phrase, “I'll slip an extra shrimp on the barbie for you” in an American television advertisement, it was intended to make what he was saying easier for his American audience to understand, but was not what an Australian would typically say, they would say prawn.