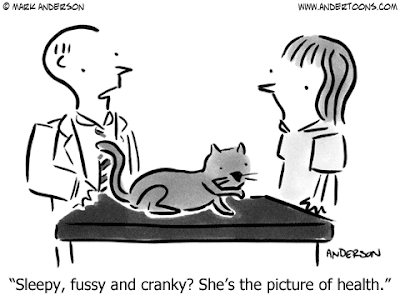 SEND HELP. I HAVE BEEN KIDNAPPED.

This is not a joke. I was sleeping peacefully on the sofa when someone grabbed me and put me into a carrier thingy.  They were clever - very, very clever. I could see out of the carrier a little bit and whoever had taken me was wearing trousers just like the old woman's.

The woman with him had disguised her voice to sound like the old woman's. The kidnappers were obviously trying to lull me into a false sense of security but they don't fool me, the old man and old woman would never subject me to this treatment.

The next thing I knew I was in a car and being driven away. I could hear bits of a conversation over the sound of the car engine. I heard: "She's not gonna to like it," and "Do you think she will ever forgive us?" and "It's for her own good." Being kidnapped is for my own good? I don't think so.

Then I was in a place that smelled strongly medicinal. I could hear people talking about dreadful subjects like cat flu and calicivirus and, worst of all - gulp - INJECTIONS. I was taken from the carrier and plonked unceremoniously on a metal table. Someone had me covered with a towel - someone wearing very thick gloves.

Now, here I am and  - I hardly know how to tell you this - a man in a white coat is STICKING NEEDLES INTO MY REAR END. What torture is this?

As my head emerges from under the towel I see the old man and the old woman. They have come to rescue me! The old woman picks me up and strokes me. The old man tickles me under the chin. Stop faffing about, you two.