Toffee Has A Distressing Day 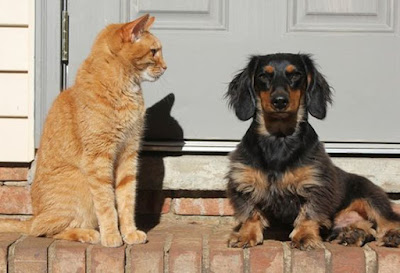 I've been re-reading my book, Not So Sweet Toffee, and wondered what I had written for today's date July 22. I wish I hadn't, it brought back a somewhat distressing canine-related unwelcome memory.
I reproduce it below, so you can see for yourself why I was distressed! See, it's more than a sophisticated feline like me should bear.

What circle of hell is this? I am sitting under the coffee table while a demented servant of Satan whirls about snuffling and snapping. I swiped his nose when he poked it under the table and he made a yelping noise and backed off. I’m safe for now, but will he and other minions of Beelzebub return to torment me?

The old man and the old woman have betrayed me. In an act of treachery that is hard to fathom, they let this slobbering beast into the house with his hooman disciple.

I learned that this beast is called, ‘Sit!’ because that is what she keeps shouting at him.

Sit is now clawing at the old man’s leg. I can see the old man is less than pleased. He has that smile/grimace/BuggerOffYouLittleShit look on his face.

The old man tries to sound jokey but I can tell he means every word; jaw is clenched, teeth don’t part. ‘Well, let him play with someone else then.’ Disciple laughs.

The old woman looks worried. She glances at me and then at the old man’s clawed trousers.

‘Let him come into the kitchen with me,’ she says, ‘I think there’s a little bit of beef in the fridge. Would he like that?’

Sit stares at her, as well he might; she is obviously completely bonkers. And he is obviously a pouch of meaty chunks short of a box if he has to have everything repeated three times.

The old woman takes him off to the kitchen, shutting the door firmly behind her. She returns alone. I’m hoping she has consigned him from whence he came. If the consigning involved red hot needles and a ramrod, so much the better.

‘I’ve made a pot of tea and some sandwiches,’ she says, ‘so if you’d like to come through…’ They all disappear. I stay under the table until I hear the front door close. I emerge from under the coffee table as the old man and the old woman come back into the room.

‘Thank God she’s gone,’ says the old man, flopping onto to the sofa. I climb up beside him and he absent-mindedly strokes my ears. ‘I don’t know who’s more annoying that woman or the bloody dog.’

Dog? Was it a dog? I suppose that’s marginally better than a servant of Satan. Only marginally. 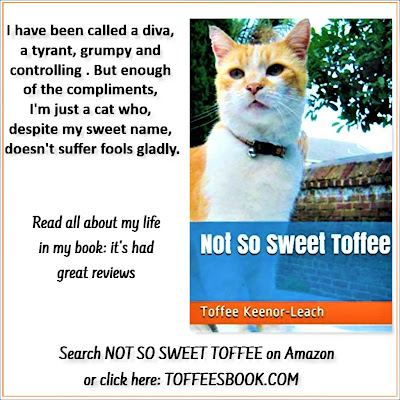