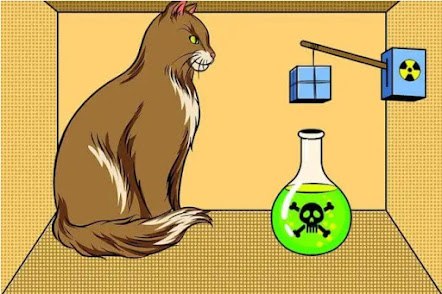 The old woman has been reading about Schrodinger's Cat. I don't know why; she's not at all scientific. As far as I can make out her experience of science begins and ends with using a Bunsen burner in the third form at school and nearly setting herself on fire.

As per usual, it was left to me to make sense of this very complicated scientific principle. Let me explain. Schrodinger said if you put a cat, some poison, a Geiger counter hitched up to a hammer and some radioactive substance in a steel box, the radioactive bit either will or won't decay. If it decays it sets in motion a reaction that will shatter the bottle of poison and the cat dies, if the radioactive bit doesn't decay, the cat lives. Like below:

You open the box and it's either tears and a touching funeral or the cat jumps out demanding his tea. I agree with writer Terry Pratchett who said in his book Lords and Ladies, that there was a third possible state for the cat in the box and that was "bloody furious".
Quantum experiments had shown that the behaviour of an atom or photon was dependent upon the observer. What Schrodinger was saying is that you cannot apply this theory to everyday objects, like cats. It was all a paradox as it WAS happening with the atoms and photons.
In other words, the cat is EITHER alive or dead, irrespective of the observer.

I don't know why Schrodinger was so sure that a cat couldn't be alive or dead simultaneously. It's an everyday phenomenon observed by cat owners the world over. See this picture? 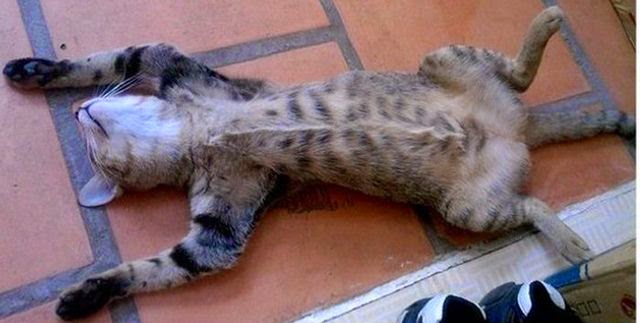 This cat has "died" to punish you for some oversight or omission like accidentally throwing out his saliva-infused, stinky, half -chewed toy mouse, but as soon as you run to him sobbing uncontrollably, he will jump up and the scare the life out of you.
So that's the explanation. You're welcome.