The Old Woman Decides To Exercise 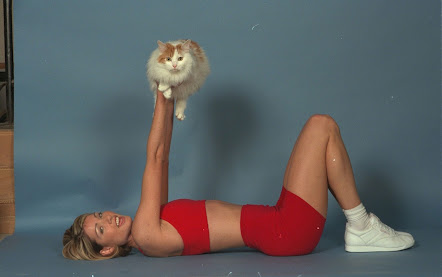 The old woman looks NOTHING LIKE this and she'd better not try any of these shenanigans on me!
I am lying here on the sofa with my paws over my eyes. Why? The old woman has decided she needs to get fit.
I regularly endure these bouts of activity when the house shakes to the pounding of her feet and I have to block my ears to grunts, moans and streams of profanity.
In her quest for bodily perfection - or at least the desire not to be winched out of a bedroom window by crane when she dies - she trawls the internet for hints and inspiration in the vain hope that the way to lose weight is to eat whatever you like and never move from in front of the TV. Sadly, no such exercise regime is forthcoming. 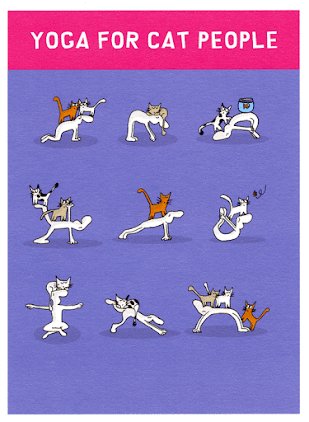 She has found a website called Fun and Exciting Ways To Lose Weight. She is very excited by it although I fear a lot of the suggestions are for people considerably younger than she is. She has taken a fancy to the thought of hula-hooping, something she did as a child, apparently. I'm afraid she won't be able to find one big enough to fit round her. It must be difficult to hula-hoop with something resembling a snug belt. (Oh, I'm such a funny cat!)
Other suggestions include twerking (dear God, NOOOOOO), strip aerobics (seriously?) where the idea is to learn moves similar to a striptease and get fit while doing it and belly dancing. I'm hoping she will try the sensible suggestions like swimming, cycling and walking, anything to get her out of the house.
She's bought something that you pile fruit and veg (urgh) into to make smoothies. I wonder if you can make a smoothie out of prawns and cream? That sounds like delicious cat food to me.
The old man is already in her bad books. He was telling our neighbour that the old woman had already lost 50 pounds. She looked very impressed until he added, "That's what she's spent on some kitchen juicer thing." He'd better watch out or bits of him will be in it.