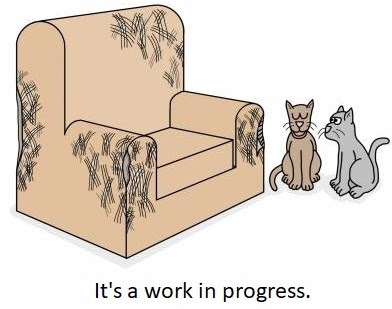 READING my posts you may have thought I don't much care for the old man and the old woman. You couldn't be further from the truth. They are my family so I have to tease and torment them; it's compulsory. Deep down, I would throw myself at a rabid Rottweiler to save them. It's instinct.

Instinct explains a lot of  feline behaviour. The whole cat/human thing began thousands of years ago. Humans looked after us in return for us killing the rats and mice that attacked their stores of grain. Gradually, we cats managed to domesticate the human. Domestication of humans was largely a success but because of the cat's instinct for hunting and killing, our points of view sometimes differ.

Cats need to be on high alert at all times in case some prey comes scuttling into view. We need to be ready for the fray. We need to keep our claws honed. They must be as sharp as a fishmonger's filleting knife, so we sharpen where we can - the furniture, the stairs, doors and on the human head. Not all of these - in fact none of them - seem to be acceptable for some reason. Humans provide us with objects called "scratching posts". These are handy if they are right beside you when you get the urge to hone, but cats are not going to walk any distance to find one, "any distance" being further than six inches.

We also have the instinct to communicate. Humans are not clever enough to learn cat language. Unfortunately, evolution has not arranged it so cats have moveable mouth parts and a suitable larynx to talk to humans so we have found other ways to let humans know what we want. Some of these ways, I concede, humans can find annoying but what's a cat to do? The methods include persistent meowing, weaving in and out of human legs (look, it's not our fault you only have two and are not as stable as we quadrupeds), throwing up and pressing our heads into your faces.

Then there is the language of the eyes.  In our repertoire we have big pleading eyes, narrowed slits of anger, sleepy eyes and "eye" want something and I want it NOW!

It pains me to touch on this next instinct - but it is the instinct to reproduce. Why does this pain me? BECAUSE I HAVE HAD THE OPERATION. Humans firmly believe it is necessary not to have millions of cats reproducing with the all the attendant problems of over-population.  I can see their point, I suppose. On the face of it lots more little Toffees with their inevitable devastating charm and beauty sounds appealing but too many cats can lead to serious problems. Anyway, I don't think I can stand the competition.

All this writing has made me exhausted so I am now off to indulge my instinct to sleep.

...or get the paperback