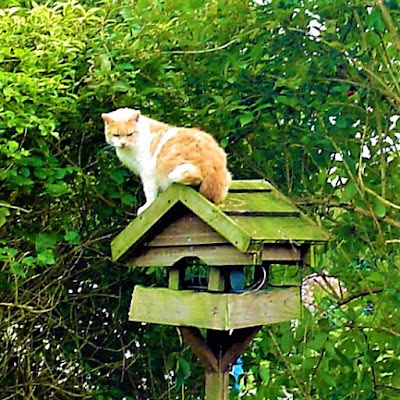 The old man and the old woman were up before me and slid my chicken chunks into my bowl as soon as I meowed expectantly at them. I'll train them yet.

It was then a quick trip out through the catflap for my morning constitutional before taking up position at the base of the bird table.

Three dopey bluetits came a-visiting. I launched myself up the bird table pole more in hope than expectation and they flapped away in dishevelled terror. Ha, ha, ha.

I then got on top of the bird table and, like magic, all the birds disappeared. I have NO IDEA why they flew off. They probably couldn't cope with my level of beauty. Yes, that must be it.

I hopped down and strolled around spraying on the bushes to reiterate that this garden in MINE. But, do you know, that twat from next door still came strolling around the garden shed. It's some kind of Persian-cross thing that thinks that its drop of pedigree blood makes it superior. Idiot. It's called Rajah. I rest my case.

I launched myself at him and he hot-footed it pretty damn quick. And as he was aiming for the gap in the hedge, a starling did a huge poop on his head. He looked up to see who was dive-bombing him and fell over a branch. I laughed until I was dizzy

I can't really remember much about the rest of the day. I had a nap on clean clothes piled neatly on the spare bed, turned round and round on it, messing it up nicely, before going outside to sit in the sun.

A couple of snacks and several naps later, the old man and old woman were home from work. They do have their uses and scratching my stomach and rubbing my back are two of them.

Night, night Peeps.
I've written all about my birdwatching hobby - and lots of other things here.